Cooperation with other EU bodies

The SRB works closely with other EU bodies. Key stakeholders in this respect are:

Cooperation with the authorities of Non-Banking Union EU countries

The SRB has signed a number of cooperation agreements with third countries in order to facilitate resolution planning, the implementation of resolution decisions for cross-border entities and the exchange of information.

Resolution Colleges are composed of the following members:

The resolution authorities of third countries (i.e. countries outside of the EU) where a parent undertaking, a credit institution or an investment firm established in the EU has a significant subsidiary or branch, may at their request be invited to participate in the Resolution College as observers, provided that they are subject to equivalent confidentiality requirements.

Furthermore, European Resolution Colleges (ERCs) must be set up where two or more subsidiaries or significant branches are located in the EU of a parent undertaking, credit institution or investment firm that is headquartered in a third country. 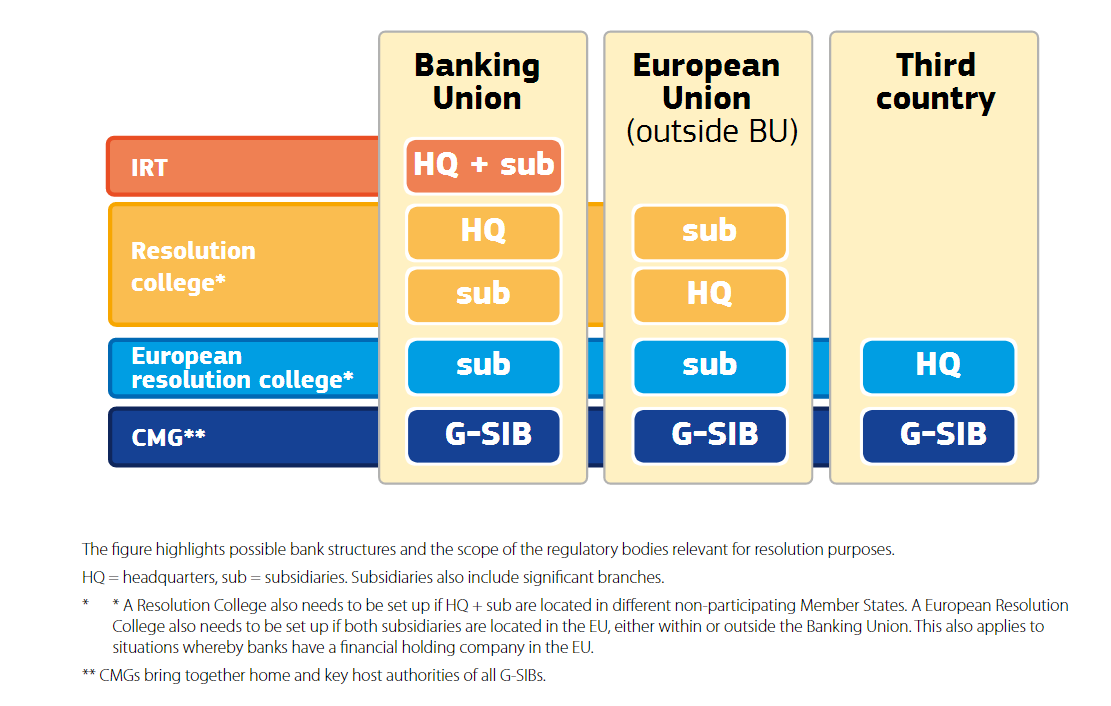 CMGs have been set up for G-SIBs, as recommended by the FSB in its Key Attributes for Effective Resolution Regimes. CMGs are composed of the resolution authorities, supervisory authorities, central banks, finance ministries and public authorities responsible for DGSs of the countries where entities of the G-SIBs are located that are considered material to potential resolution of the G-SIBs. The authorities involved in CMGs sign institution specific Cooperation Agreements in which they specify the information exchange between them and the processes for information sharing with non-CMG authorities.

A Resolvability Assessment Process (RAP) is conducted annually in respect of all G-SIBs to promote adequate and consistent reporting on resolvability at a global level and to determine what should be done to address material recurring issues with respect to resolvability. The RAP conducted in each CMG is summarised in a so-called ‘RAP letter’ addressed to the Chair of the FSB. The SRB is in charge of preparing such letters for all G-SIBs within its remit.

PDF | 623.38 KB | Publishing date: 05/02/2021 | Decision date: 13/08/2019
2019-08-01 Memorandum of Understanding between the Commission and the Single Resolution Board in respect of certain elements of cooperation and information exchange pursuant to the Single Resolution Mechanism Regulation

PDF | 185.11 KB | Publishing date: 09/11/2020
2016-12-06 Memorandum of Understanding between the Single Resolution Board and Riksgäldskontoret concerning the cooperation and information exchange in resolution

PDF | 62.45 KB | Publishing date: 14/12/2017
2017-09-20 Cooperation arrangement concerning the resolution of Insured Depository Institutions and certain other financial companies with cross-border operations in the United States and the European Banking Union

Cooperation arrangement between the SRB and the Bank of England